Climate Denialism Is Anything but Dead

In this article we will deliberately use the term climate denialism instead of climate skepticism, which is actually the more commonly used expression. In fact, skepticism is a positive attitude that should be encouraged. Contrarily, in the sciences denialism designates "the rejection of indisputable and facts and concepts widely supported by scientific consensus in favor of radical and controversial ideas." This is indeed the framework we are in regarding the impact of human activities on the climate.

The controversies surrounding the issue of climate change are heated. Some of them have to do with what actions to take or what the priorities at hand are and thus go beyond the strict field of science. The debate is more about values, economics, political or social choices then about science. But there are still some who question the scientific consensus described in the reports of the IPCC (Intergovernmental Panel on Climate Change), be it by second guessing the existence of global warming itself, rejecting the role of human activities in increasing the concentration of carbon dioxide (CO2) in the atmosphere, and, more often than not, by trivializing the impact that atmospheric CO2 has on the climate.

The standard-bearer of this position has historically been Claude Allègre, a respected scientist specializing in internal geophysics who then became an advisor to Lionel Jospin and eventually the Minister of Education. After his time in the government, and since his scientific career was over, he wrote several books and would appear very regularly in the media to deny or minimize the human causes of climate change. Claude Allègre suddenly disappeared from the media scene for health reasons. The other major scientific supporter of this position is Vincent Courtillot, a colleague of Claude Allègre at the Globe Institute of Physics. Courtillot has not written mainstream books focused on this subject and he deserves credit for having followed the standards of scientific debate by submitting some of his hypotheses to peer review through publications in specialized journals. The ideas exposed in his publications, which stress the sun's contribution to climate change, were quickly quashed by pointing out methodological errors [1].

Nevertheless, when he gave lectures they were widely streamed and watched on YouTube. In them he exposed theories that go well beyond what he published and that appear to be unfounded. For example, he often suggested a "pause" in global warming between 1998 and 2013, a 15-year period in which average global temperatures showed relative stability, but he limited the comparison to the first year, an exceptionally hot one due to an intense El Niño effect. The truth is that the following years (2015 – 2017) clearly showed that global warming did not stop in 1998 and further confirmed climate projections. When looking at decadal timescales, however, the increasing temperatures observed follow the predictions of the first climate simulations carried out in the 1980s and others performed within the framework of the IPCC [2].

After a few years, Francois Gervais, professor emeritus at the University of Tours entered the fray. He authored two mainstream works, The Innocence of Carbon: The greenhouse effect put into question (2013) and The Climate Emergency Is an Illusion (2018). The latter was largely covered in the media and led to many conferences featuring the author that can be found on YouTube.

We set out to analyze two examples that illustrate the author's procedures for transmitting a message that goes against the state of scientific knowledge and can easily mislead an insufficiently informed public, despite its solid scientific foundations [3][4].

The Reality of Climate Change and Forecasting Models

In the latest IPCC report, issued in 2013 [5], the observed speed of warming is compared to what was expected by other climate simulation models. Three periods were considered. For the longest period (1951-2012: c), the rate of warming (degrees per decade) is well within the high range values of the model. In a shorter, and therefore less representative period (1984-1998: b), the trend is rather in the high range of the modeled values. Conversely, in the "pause" period mentioned above (1998-2012), the rise is within the lower limit of what was predicted by the models. It is normal that the natural variability of the climate have an influence on the trend calculated for short periods. However, in Gervais's recent book (Figure 4, page 61) and recent media appearances, he only shows the graph regarding this third period (Figure A) without ever mentioning the other two. He then states that the model's results are contradicted by the observation that the climate, in the end, is a lot less sensitive to CO2 than what the IPCC points out. This is not really the case, since the long-term trend in climate change falls in the range forecast by the models.

The greenhouse effect is a phenomenon whose principle has been well understood for over two centuries and quantified for decades [6]. An increase in the greenhouse effect in the troposphere (the 10-odd-kilometer-thick layer of the atmosphere in which we live) leads to a rise in temperatures. Conversely, in the stratosphere (the atmospheric layer above the troposphere that reaches an altitude of up to 50km), an increase in the concentration of C02 brings about a drop in temperature, all things being equal. In practice, the temperature of the stratosphere is driven above all by the concentration of ozone (03), itself influenced by changes in solar radiation and chemical reactions depending on the make-up of the atmosphere.

François Gervais shows stratospheric temperatures measured by satellite. He states that the "IPCC models" ought to predict a maximum variation in that layer (without making it clear whether this variation ought to be an increase or decrease in temperature) [7], whereas the observations show very few changes over the last 20 years. This is where Gervais sees proof that the greenhouse effect theory is false. The truth is that the same IPCC models whose projections show an increase in surface temperatures clearly show stability in the temperatures of the stratosphere over the past 20 years. The measurements put forth by François Gervais to disqualify the models, though never presenting their results, create an added rebuttal to his position: the "IPCC models" reproduce not only the increase in surface temperatures, but also their variations in the stratosphere. 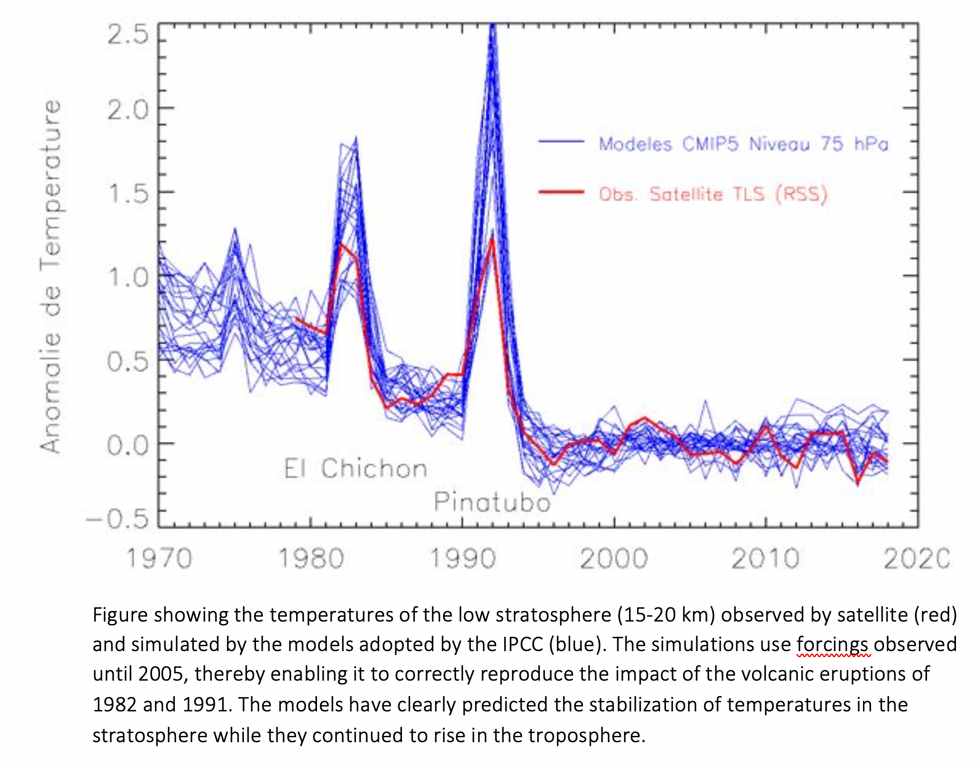 Discourse in the Media

The situation has changed a lot in 15 years. Today an overwhelming majority of journalists cite the scientific consensus and do not resort to obscure forces or a major ecological lobby to interpret the prevailing agreement. As far as major societal debates go, this is rather an exception to the rule. The readers of Science et pseudo-sciences know about the media's transgressions on subjects such as vaccines, homeopathy, GMOs or the impact of electromagnetic waves on our health. The media's presentation on these topics is unfortunately a far cry from faithful reporting on the state of scientific knowledge. We can thus say that when it comes to the climate, scientists have won the fight with the media even though the battle rages on at many other fronts.

This "media victory" is probably due, at least in part, to the existence of the IPCC, and more specifically to the writing of a "Summary for Policymakers" describing the scientific consensus while clearly pointing out the degree of confidence there is on the different subjects addressed. The document is accessible to a broad public (the summaries are targeted at readers with a high school science background) and so, journalists can refer to them without having to read, understand and evaluate the original publications that are geared to an entirely different audience. Should there be an IPCC equivalent that could be referred to on subjects such as GMOs or the health impact of electromagnetic waves emitted by mobile phones?

François-Marie Bréon is a climate researcher at Laboratoire des Sciences du Climat et de l’Environnement. He is also an active member of the Association Francaise pour l’Information scientifique, a skeptic group that promotes sciences in France. The original version of this article, in French and with more references, can be found here.

2 | Climate model projections compared to observations at realclimate.org, which regularly updates its comparison of previous climate projections with the observed climate (in English).

As raízes do “hype” da cloroquina