Survey: Beliefs in science and pseudoscience in Brazil

More Brazilians believe in the importance of vaccines than in the validity of so-called alternative therapies, and almost 90% of the adult population accepts, albeit in part, the fact that climate change is real and caused by human activity. Nevertheless, almost half of Brazilian adults reject one of the fundamental principles of the Theory of Evolution, the one that says that human beings and other primates descend from a common ancestor. Moreover, almost 40% of the country's adult population believes the government hides information about aliens.

These are some of the results of a national survey on public understanding of science conducted in March by Datafolha institute by request of Instituto Questão de Ciência (Question of Science Institute). More than 2,000 Brazilians aged 16 years and over were surveyed in 130 municipalities in all regions of the country. The margin of error of the results is plus or minus two percentage points.

The survey evaluated the degree of agreement of respondents with a series of statements that either reflect scientific consensus (e.g., "Getting vaccinated is important because it brings health benefits"; "The Earth revolves around the Sun"; "Global warming and climate change from human activities are a real problem that will have serious effects on society ") or pseudoscientific beliefs ("Spiritual energy can have the power of healing"; "Aliens have visited ancient civilizations on Earth"; "Genetically modified foods are harmful to health").

The result shows a multifaceted national profile, in which 97% agree on the importance of vaccines, but on the other hand, 83% think alternative medicine is a "good option for treating diseases," and 66% believe in the healing power of "the spiritual." Moreover, the statement "Human beings and chimpanzees come from a species of common origin" is accepted by just over half of the sample (54%), while 73% think that consuming GMO food is bad for your health.

According to the survey, more people believe in conspiracy theories involving governments and aliens (38%) than in the safety of GMOs for human health (27%), despite the fact that the first statement is pseudoscientific and the second a firm scientific consensus: a 2016 survey of the National Academy of Sciences of the United States found more than 1,500 studies confirming that the consumption of GMOs has no negative impact on human health.

On the plus side, so-called anti-scientific negations – rejection of statements endorsed by the scientific community – seem to have very little penetration, except for evolutionary theory and the transgenics issue. Only 3% of people rebutted the importance of vaccines, 5% denied that the Earth revolves around the Sun, and 10% rejected the reality and seriousness of climate change.

The Datafolha analysis allowed the sample to be divided into four affinity groups - or clusters -according to the level of agreement of the answers.

The cluster closest to scientific consensus –29% of the sample –shows the highest degree of agreement with the following statements: "The Earth revolves around the sun"; "It is important to get vaccinated because it brings health benefits"; "Humans and chimpanzees come from a species of common origin"; and "Global warming and climate change from human activities are a real problem." 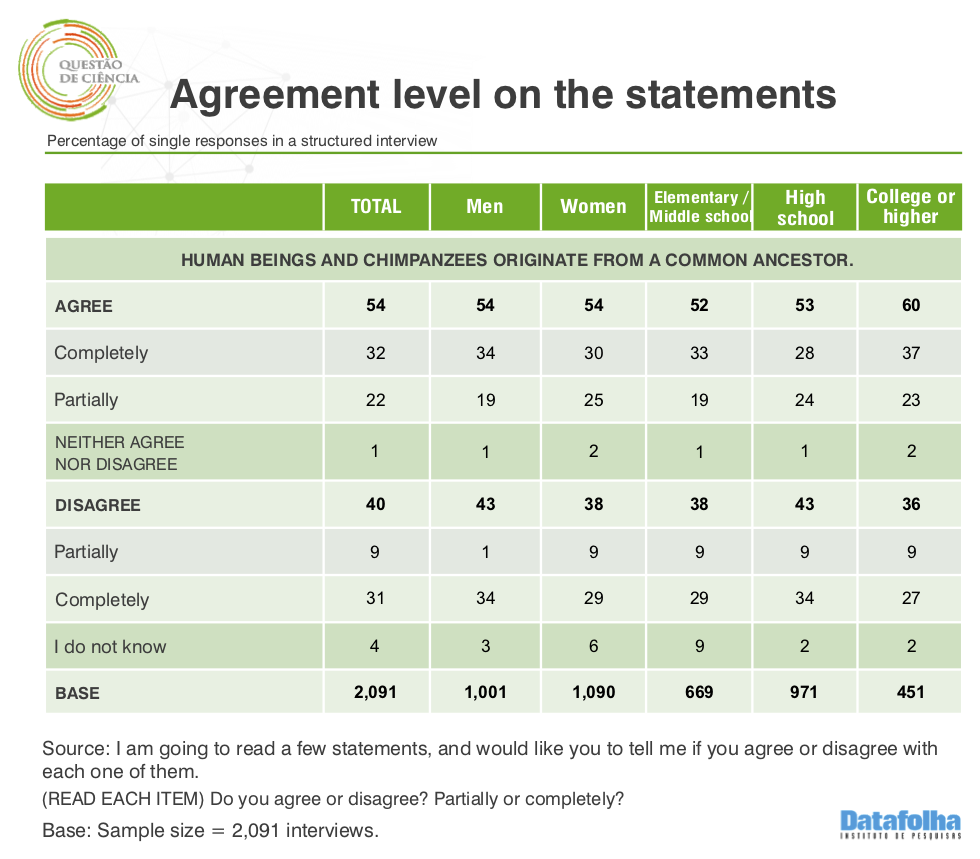 Moreover, this is the group that disagrees the most with the idea that there are benefits in alternative medicine, of healing power of spiritual energy,  possible harms in the consumption of GMOs and the idea that there have been interactions between humans and aliens in the present or the past. In this group, the majority of the sample (75%) is made up of respondents who completed high school (49%) or higher (26%) education.

The largest group, comprising 33% of the sample, mixes a complex of pseudoscientific beliefs with environmental concerns: while on one hand it accepts the scientific consensus that climate change is real and man-made, it also rejects GMOs, embraces alternative medicine and spiritual forces, and rejects the common ancestry between human beings and chimpanzees (62% of respondents disagree with it). This share includes mostly people (78%) who finsihed elementary/middle (26%) or high school (52%).

The third set, accounting for 25% of the sample, closely resembles the previous one, but still embraces beliefs on aliens (100% agree that the government hides information about aliens, 63% that there have been extraterrestrial visits in the past). This group is less radical in its rejection of the Theory of Evolution (50% in favor, 50% against). In this profile, the majority (79%) of the respondents concluded elementary/middle (31%) or high school (48%) education.

The final group stands out from the others in their strong rejection (74%) of the anthropogenic climate change thesis and makes up 13% of the sample. This group is made up of 91% of respondents who achieved no more than elementary/middle school (51%) or high school (40%) education.

Between facts and methods

Every two years,  the National Science Foundation of the United States discloses its Science and Engineering Indicators, a thorough survey that includes questions about the popular understanding of science. In its most recent edition, compiled in the year 2016, the statement "Human beings, in their current form, developed from other species of animal" was considered "true" by 52% of respondents. 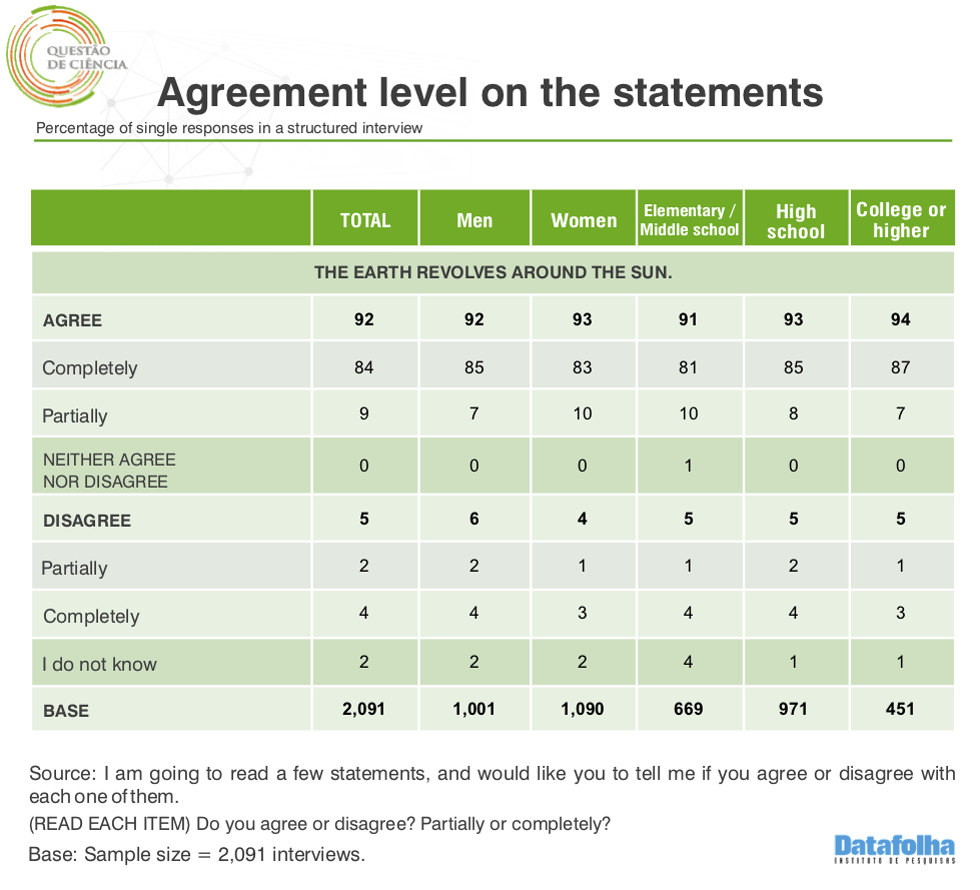 Likewise, a recent PNAS article points out that, in addition to ignorance about scientific facts, the problem of public understanding of science also involves the lack of knowledge of the methods and processes of scientific activity.

It seems likely that a person accepting the idea of common ancestry, for example –solely based on the words of some authority, having no idea what that actually means or where that conclusion comes from –, leaves the door open for this belief to be abandoned in exchange for another coming from a more charismatic authority.

Furthermore, the inconsistencies found in the profiles raised by the Datafolha survey, even in the higher educational levels (since 82% of respondents with higher education believe in the efficacy of alternative medicine, and 73% believe that GMOs are harmful) suggest that the "epistemic ignorance" – the ignorance of processes that generate and justify scientific knowledge – remains a blind spot in science education and communication efforts.

In fact, the same issue had already surfaced, albeit indirectly, in the results of the Public Perception of Science survey, carried out by the Brazilian Center for Management and Strategic Studies (CGEE) and the then Ministry of Science, Technology, and Innovation (MCTI) in 2015. The survey pointed out that the Brazilian population had a frankly positive view on science, with 60% of respondents declaring "interested" or "very interested" in scientific issues, and 78% arguing for more investments in the area.

Nevertheless, the same survey indicated that one of the main concerns of the public was the safety of GMOs for human consumption. Also, only 12% of respondents in the 2015 survey recalled the name of a national research institution, and only 6% were able to cite the name of a single Brazilian scientist. To boot, more than half of the respondents said they believe that "scientists have knowledge that makes them dangerous."

"Citizens can be misinformed and uninformed at the same time," says the PNAS article, drawing the distinction between "uninformed" (i.e. ignorant of facts) and "misinformed" (believing in ideas and concepts that do not correspond to facts). "For example, citizens may be uninformed about how the processes of science work and are misinformed of the facts of some specific scientific issue."